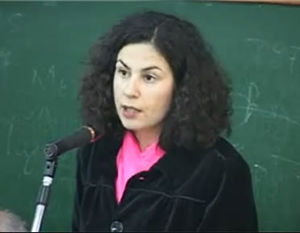 Dr. Angeliki Ziaka is a History of Religions lecturer of the Aristotle University of Thessaloniki, and a Doctor of the Marc Bloch University of Strasbourg. Dr. Ziaka specializes in the study of Islam and the Arabic/Islamic civilization and in the topic of interreligious dialogue, which she extensively researched at Strasbourg University, the Pontifical Institute of Arabic and Islamic Studies (PISAI, Roma), and the University of Amman (Jordan). Her research interests focus on Muslim theology and history as well as the social, religious, and political dimensions of Islam in the Middle East. Her comprehensive study of Shi’ism also led to the publication of her book on the social and political dimensions of  Shi’ism in 2004. She has also published books on interreligious dialogue (2010), on byzantine and post-byzantine literature and Islam (2010) and on Mahdi (the eschatological savior) and Messianic movements in Islam (2010).

Dr. Ziaka visited the University of Alabama from February 21 – 25, 2011, to meet and converse with faculty and students across the College of Arts and Sciences.  During her stay in Alabama, she also presented a public lecture, “The Muslim Presence in Greece,” on Wednesday, February 23, at 3:30 pm in Gorgas 205.

For a PDF of the flyer for her public lecture, please click here.

You can also watch a recording of her lecture through  UA’s iTunesU page. Click on the Alabama Greece Initiative collection in the Featured Collections section of that page.

Dr. Ziaka’s lecture addressed the experiences and differences of two groups of Muslims currently residing in Greece: a) the Muslims of Greek citizenship, who live permanently in Western Thrace and make up approximately 2% of the Greek population, what is known locally as the so-called “old” Islam; and b) the Muslim immigrants who have more recently moved to Greece from various Muslim countries, so-called “new” or “migrant” Islam. The Muslims of the first group have lived in Western Thrace since the 15th century—when the territory came under Ottoman domination—and are Greek citizens, fully integrated into Greek society.

In order to better understand the status of these two different groups of Muslims in Greece–on the one hand, Muslims of Greek citizenship of Western Thrace and, on the other, the recent Muslim immigrants, many of whom are financial refugees, political refugees, asylum seekers, students etc.–Prof. Ziaka argued that we need a historical, social, and juridical overview that can study the Muslim presence in Greece as a phenomena related to migration, an approach that can lead to proposals and solutions relevant to the social problems that often result from the movement of peoples across regions and the globe.